Last year I was asked if I would let my name stand for the Board of Directors of the Nottawasaga Lighthouse Preservation Society (NLPS) and as someone who likes to give back to the community, I heartily agreed.  At the NLPS Annual general meeting in June I was both elected to the Board and subsequently asked if I would act as Chair for the group which I further agreed to.  My great grandfather was a lighthouse keeper at South Baymouth on Manitoulin Island so I suppose its in my blood.

A lot has happened in the ensuing nine months some of which I will share here, and it’s all due to the efforts of what has to be the hardest working, most dedicated group of individuals on the Board of Directors as well as other volunteers engaged in fundraising etc. that I have ever had the pleasure of working with. 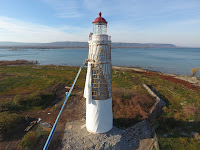 Ten or twelve years ago when I was a Director of the Collingwood Chamber of Commerce, the late Jim Kilgour came to the Chamber with the idea of restoring the Nottawasaga Lighthouse.  At the time this seemed like an ambitious plan, little did we know back then just how large this undertaking actually is and not just from a monetary standpoint.  Multi-levels of the federal government are involved including the Department of Fisheries and Oceans (DFO) and Public Works both of which have been extremely supportive of our efforts.  The DFO who is tasked with disposing of dozens of lighthouses across Canada has called us “the most credible group we are working with,” granting us permission to access the island last fall to undertake the shrink wrapping of the tower.  Despite a very uncooperative Mother Nature which necessitated wrapping of the tower not once but twice, the work was completed under the most adverse of conditions while I guiltily vacationed in New Zealand.  Special mention and thanks goes out to NLPS Vice-Chair Stephen Emo, Board Member Robert Square and to our Engineers Doug Harkbart and Erle Heintzman for persevering literally to the bitter end, completing the work on December 8th and remarkably under budget.  During the work we completed last fall, the government commissioned a structural assessment of the tower Stantec Engineering and despite the significant amount of exterior stone that has fallen off, the tower is structurally sound with no signs of leaning or other movement. 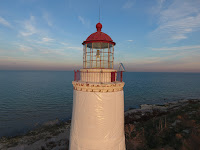 The current issue of On The Bay magazine features a letter I submitted thanking a number of local businesses who generously helped us throughout the wrapping process.  These include: Weatherall Dock and Dredge of Markdale, CRS Rentals Collingwood, Bill Brown Lumber Collingwood, SDM Construction of Woodbridge, Collingwood Home Hardware and the Town of Collingwood, Parks and Rec Department.

Since last year’s Annual General Meeting our Treasurer Nancy Leno, sister of the late Jim Kilgour and NLPS secretary Pat Anstett have worked behind the scenes building a much improved accounting and membership management system along with better banking arrangements.  Last fall we launched a newsletter to keep our Members abreast of our activities and accomplishments and we trust they have found this informative.  For the most up-to-date and accurate recap of our activities, NLPS members and the public-at-large are encouraged to visit the  “Official” NLPS Facebook page. 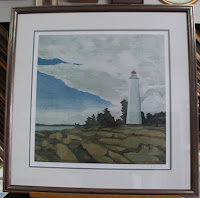 As with any project of this size, fundraising is a huge component of what needs to be done to accomplish the ultimate goal, first restoring the lighthouse and later rebuilding the lightkeeper’s house which fell victim to a fire many years ago.  NLPS Fundraising Chair Gary Norman has and continues to work tirelessly on numerous initiatives aimed at building our financial reserves and creating awareness of our cause.  Throughout the past months we have received some noteworthy contributions from both private individuals and corporate donors.  Most recently we launched the sale of lighthouse prints, featuring the work of local artist Andrew Peycha.  Andrew’s picture of the tower was commissioned by local Collingwood residents John and Carol Saunders who graciously loaned us their original to make 200 limited edition copies each one signed and numbered by the artist.  Prints are available for $125.00 with a framing package offered by Georgian Frame Gallery.

Despite a blustery winter with a lot of severe winds,  the accompanying photo I recently shot with my drone shows that the wrapping of the tower completed last fall has stood up as expected.  The initially installed shrink wrap which fell victim to high winds last November was replaced with a heavier, reinforced tarpaulin material used by the trucking industry`and we anticipate it will readily stand up for two or three years while we raised the necessary funds to commence the restoration process. 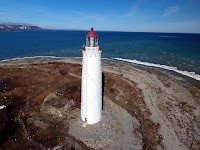 As of this posting, discussions are underway for the eventual transfer of ownership of the property from the government to NLPS.  Land Registry records which as a REALTOR® I have access to reflects the current owner as “Her Majesty The Queen in Right of Canada.”  Prior to any transfer of ownership taking place, an environmental assessment of the tower lands and other steps need to be completed.  During the remainder of this year we hope to undertake a thorough cleaning of the interior, complete some additional wrapping of the exterior a start work on some shoreline improvements for a better docking arrangement at some future point in time.  None of this work will happen quickly but it will nonetheless be rewarding and will get us that much closer to realizing our ultimate goal.

We have seen an overwhelming level of support from the community all of whom are hoping to see our vision for the restoration of the lighthouse fulfilled. We have made numerous presentations to local community groups including probus clubs and others, sharing the history of the Nottawasaga Lighthouse and our vision for its future.  If you and your group would like to learn more and would like to arrange a speaking engagement please feel free to contact me by phone or email as shown at the bottom of this post.

While we are a determined and dedicated group that has accomplished a great deal, we need your help.  Volunteers are needed for a variety of functions including fundraising, membership promotion, marketing and other activities.  If you would like to learn more or to volunteer for what is proving to be a fun project please visit the NLPS website, and be sure to LIKE the Official NLPS Facebook page.  Please feel free to contact me at 705-443-1037 or via email chair@nlps.info to learn more.