What Is To become of the Steamship S.S. Norisle 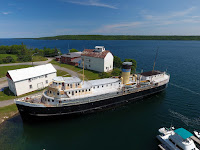 Most people that know me know that I have family as well as a cottage on Manitoulin Island.  My first trip to Manitoulin was an an infant, six months old and the ferry crossing was made on the Steamship Norisle.  It was about a three hour crossing almost twice the time it takes for today’s ferry the Chi Cheemaun and as kids it seemed to take forever.  It is somewhat ironic that I now live in Collingwood as the Norisle was built in the Collingwood Shipyards in 1946, several years before my birth. 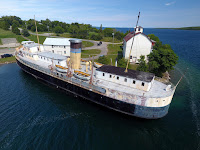 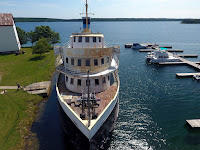 In the late 1970’s I worked in the summer as a dock attendant at South Baymouth, tying up the Norisle and its sister ship the Norgoma when they came into port, driving cars off and on.  Unlike today’s ferry the Chi Cheemaun which is a drive on drive off ship, the Norisle and Norgoma loaded from their sides and it was a challenge to unhitch and jocky around campers and trailers to get them loaded.  For vehicles that were slightly higher than the loading doors,  we would let air out of the tires and stand on the vehicle’s bumpers to weigh them down in order for them to fit.  The Norisle held about 50 cars, a dozen or so went down an elevator to a lower car deck. In my slim youth I could easily squeeze in and out of the vehicles on the elevator as it was a tight fit.  When loading cars you followed the direction of one of the ships Mate’s, never looking back but following their finger movements turning the steering wheel in sync with their finger to back into the designated parking spot. It was quite a performance. 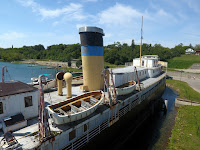 At the time of its retirement in 1974 the Norisle was the last passenger steamship operating on the Great Lakes.  It has since been berthed at the town of Manitowaning on Manitoulin, operating at times as a restaurant and museum.  In recent years however it has sat idle, a liability that the local municipality no longer wants or can afford.  Opposing groups have their eyes on acquiring the ship but for alternate if not controversial purposes.  One group envisions a restore vessel operating as a cruise ship while the other wants to sink it off Tobermory as a dive site.  It’s ultimate disposition is now being challenged in court meanwhile the ship sits as you see it in these photos, rusting and forgotten. 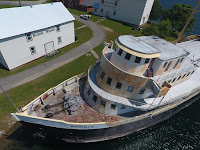 There has also been talk about returning the Norisle to its birthplace of Collingwood, where it would serve as a reminder of Collingwood’s shipbuilding past.  Someone suggested it get parked in the former drydock with an atrium enclosure, a full size ship in a bottle that could be toured year round.
Whenever it ends up,whether once again cruising the waters around Manitoulin, permanently moored in Collingwood or resting on the bottom of Lake Huron, The Norisle will always hold a lot of memories for me both as a means of transportation or as a source of employment allowing me to my summers at what is for me a very special place, Manitoulin. 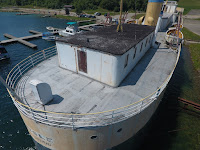